Interesting discovery from the Long Beach Comic Expo: Doc Yeti Fuk’son — Yeti Detective. Yes that’s the title! It’s a black & white on-line comic that’s now available as a traditional comic too. “Doc Yeti Fuk’son, yeti detective, has the goddamn world at his feet. He’s taking down punks, cleaning up the streets, and making killer puns. The only thing hotter than his career is his wife. Or… it was. Two years later, Doc lives alone, punlessly powering through MacGyver, tapioca, and brown liquor. But his sister JD Yeti Fuk’son is on the case! She brings him a murder both gruesome and topical to drag Doc back into action. Something for him to take… personally.” Doc Yeti is written by Allison Solano and illustrated by Sean Morgan. The official web site will tell you all about it. 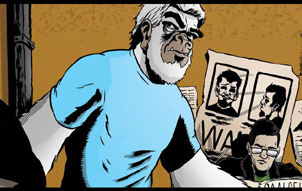