And the Aardvark Shall Lead Them

Thanks to a recent YouTube post about upcoming animated films, we learned of a new feature in production called The Ark and the Aardvark. Here’s the ad blurb: “The story follows an outcast aardvark by the name of Gilbert [voiced by Miles Teller], who becomes the reluctant leader of a ragtag group of misfit animals that need to be led to the mighty ark before the impending flood. Along their journey, they band together to conquer unforeseen obstacles, and ultimately, Gilbert discovers within himself the inner strength and ingenuity to prove that in a world of ‘twos’, he was truly destined to be The One.” Currently in production at Unified Pictures, the film is being directed by John Stevenson — co-director of the original Kung Fu Panda. No word yet on a precise release date (or who is going to distribute it), but it’s supposed to come out this year. 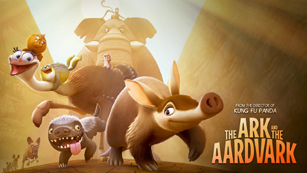