So how’d we go and let this phenomenon pass us by? Animal Jam is an on-line MMORPG gaming environment, launched in 2010 by the National Geographic Society. It was designed to use a fantasy setting to teach young children about zoology, natural history, and ecology. According to Wikipedia, “Animal Jam takes place in a fictional area known as Jamaa, containing various biomes and cartoon player-created animals. Players can create an animal with an anonymous 3-part name, such as ‘Crashing Magicshark’, dress it up with virtual clothing, and control it in the gameplay environment. The original six virtual animals that could be created were the panda, rabbit, tiger, wolf, koala, and monkey. Many more animals have been added following the six, letting players have the possibility of seeing one of their favorite animals in the game.” Now, after years on line, Dynamite Entertainment have announced the premier of the first Animal Jam comic book series, coming later in 2017. There’s an article about it over at News-a-rama. The first appearance of the new comic will be part of Dynamite’s contribution to this year’s Free Comic Book Day in May. 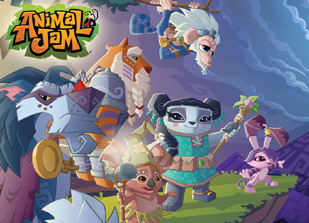