Secrets of the Circus Revealed!

Here’s what publisher First Second have to say about their new prequel book Animal Crackers — Circus Mayhem: “The wacky, high-action graphic novel companion to Animal Crackers, Scott Christian Sava’s highly-anticipated animated feature film. Buffalo Bob’s Rootin’ Tootin’ Animal Circus is famous for its jump-roping giraffe, tangoing lion, and knife-throwing elephant. But they have to be fakes, right? Owen is determined to get to the bottom of this mystery. When he visits the circus he discovers that his uncle and, coincidentally, all of the animals, are missing. It can only be the work of Buffalo Bob’s sideshow rival: Contorto. Owen stumbles upon the one thing that can save the day: Buffalo Bob’s box of animal crackers. But these aren’t any ordinary cookies: One bite and you’re transformed into a circus animal!” Look for it in hardcover later this month, or you can read all about it over on Goodreads. 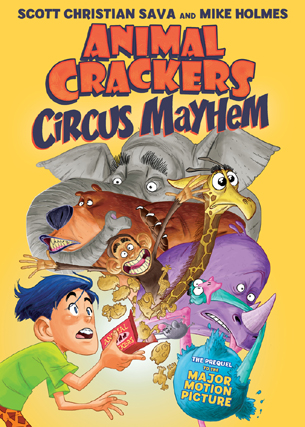