Rocket and HIS Old Friends!

In what is perhaps a strange move (given his currently ever-growing popularity!) Marvel Comics have canceled their most recent Rocket Raccoon comic book series — only to replace it with a new one called Rocket, according to Bleeding Cool. “He thought his paws were clean, that they were on the up and up. But just when he thought he was out, they grabbed him by the fuzzy tail and pulled him back in. One day, and old flame (who happens to be an Otter) swims back into your life and just like that you’re back in the game…the heist game. From the dingy alleys of Knowhere to the far corners of deep space, they’ll speak in whispers that one of the best there ever was is back. If you need a safe cracked. If you need a vault busted. If you’ve got a big score that needs taking…you call Rocket. Just don’t call him a raccoon. It won’t end well for you.” Good Grief — the return of Lylla?? Look for it this May, written by by Al Ewing (The Ultimates, U.S.Avengers) and illustrated by Adam Gorham (The Violent). 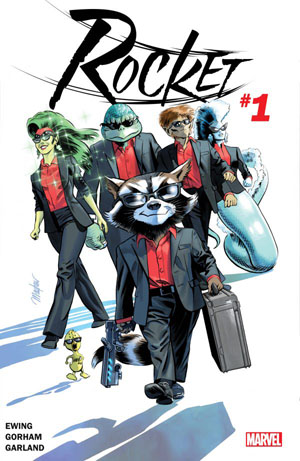