Man on the Island of Monkeys

And no, we’re not talking about Kong of Skull Island either. Cartoon Brew has an article about a new animated film in development called Kensuke’s Kingdom. “Based on the bestselling novel by War Horse author Michael Morpurgo and adapted for the screen by screenwriter Frank Cottrell Boyce (Hilary and Jackie, Welcome to Sarajevo, The Railway Man), Kensuke’s Kingdom follows the story of a young boy who washes up on a tropical island overseen by a mysterious Japanese soldier named Kensuke, who lives there with a family of orangutans as his companions.” Directed by animation veterans Neil Boyle and Kirk Hendry, the film combines a variety of 2D techniques for a rather unique overall look. No word yet on any plans for international distribution, but the Cartoon Brew article includes a proof-of-concept short film the directors have been showing around lately. It gives you a good idea what the film might look like. 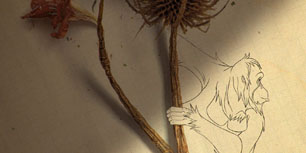