John Layman made a name for himself with the surreal comic book series Chew. Now he’s at Aftershock Comics with a new title called Eleanor & The Egret. Here’s what Comic Alliance said about it: “With the wrap up of Chew this year, John Layman has proved himself one of the go-to creators when it comes to crime comedy comics, and Eleanor and the Egret looks to be at least as surreal as his previous series. Sam Kieth, the legendary creator behind The Maxx, feels like an exciting choice to illustrate this Catch Me If You Can-style caper involving an art thief and a heron.” A heron who eats fine works of art, in fact. This is from the publishers: “A slightly surreal tale of an art thief and her sidekick, a talking egret who gets just a bit bigger after each successful caper, as they embark on a escalating series of daring thefts of world-famous paintings, and dodge pursuers in an increasingly weirdly dangerous game of cat & mouse.” Look for it this April. 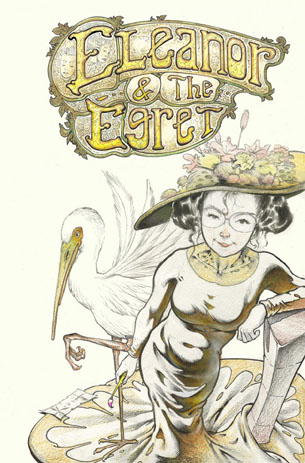