And Speaking of Wolves…

We got this direct from Anime News Network. Seven Seas Entertainment have licensed Spica Aoki’s fantasy manga series Beasts of Abigaile for distribution in North America. Here’s what the publishers say: “Beasts of Abigaile follows a young woman’s fantastical adventures in the mythical country of Ruberia—and all the trials, tribulations, and attractive half-beast people that come with it! In this exciting new series loosely inspired by the classic fable of Little Red Riding Hood, readers will embark on a beautifully-illustrated journey of magical adventure and romance. Tsukishiro Nina has just arrived in the beautiful country of Ruberia, and its charming denizens and lush scenery are like a fairy tale come true. That is until she’s beset by a mysterious young man with a steely gaze and furry wolf ears—who promptly bites her! Nina finds herself turning into one of these beasts of legend, and whisked away to the prison of Abigaile where all their kind are sent. Nina must keep her wits about her if she’s to learn the secrets of this magical world where everyone either makes her blood boil or her young heart race!” Look for it to be released in black & white this June. 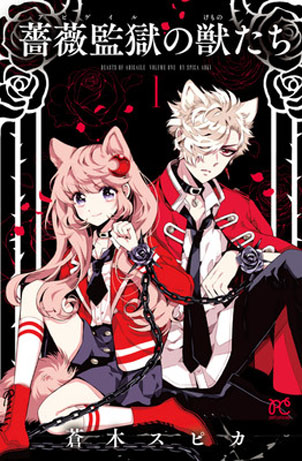