Later this month, Magnetic Press will be releasing the next installment of the Klaw series entitled Klaw: The Second Cycle. Once again it’s a hardcover graphic novel written by Antoine Ozanam and illustrated by Joël Jurion. As you may recall, in the first issue of Klaw we met young Angel Tomassini, who discovers several scary things at once: When he’s angry he turns into an anthro-tiger, and his father is a vicious crime boss, and there is a whole society of were-creatures who do not always have each others’ best interests at heart. And now: “The second volume in the series follows Angel and his girlfriend Lisa as they flee across the globe from the many dangerous forces that would steal their were-animal spirit for their own nefarious, criminal use.  As if spotting and defending themselves from these hidden enemies isn’t hard enough, they also have to keep their own delicate control of their powers in check… innocent lives can get caught in the crossfire, and all the power in the world is useless if you can’t protect your friends and loved ones…” Check out the preview pages. 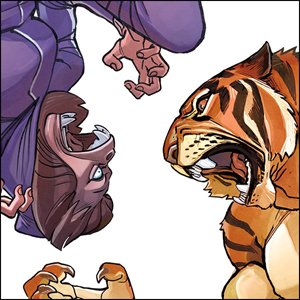