Jessica Chrysler is an artist who creates mostly fantasy works, with some occasional anthropomorphics. But when she goes anthro, she goes for it in a big way! First there was Cody the Coyote, a Native American folklore re-imagined as an illustrated book for children. It’s still available on-line. More recently she’s been writing and illustrating a science fiction novel called Monolithium. “After surviving torture for treason, Elara wakes to find herself transformed into a creature known as the enemy of the empire. While she must flee her home planet to stay alive, she soon discovers that Queen Varina had not only meant to take her life, but also her uncle’s throne and control of the realm.” That creature in question is the blue feathered reptile you see below. Jessica has been selling an illustrated teaser booklet for Monolithium at conventions, so look for her at one near you. And visit her web site to get updates on her progress. 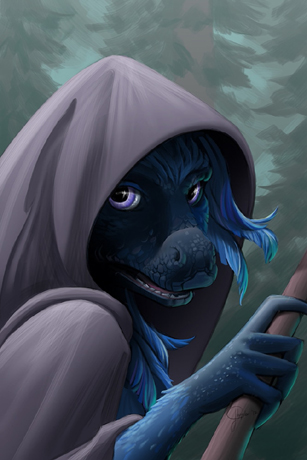