This One You Can Call A Raccoon

Cameron Ferweda is a young author who wrote (and published!) his first book for young readers at the age of 10. Now in his teen years, he has continued to write The Great Adventures of Rocky Raccoon in three more books (so far), all of them skillfully illustrated by his dad, Michael Ferweda. According to the Rocky web site, “The Great Adventures of Rocky Raccoon is a series of spellbinding story tales of the two most unlikely of friends. Rocky and his sidekick, Buff [a frog], run into trouble at every turn of the page. Encountering pirates, monsters, and an evil duo, Rocky and Buff outwit them all. In this [first] tale, The Fight for Fang, Rocky becomes lost in a terrible storm and finds himself face to face with his worst nightmare – Fang!” The stories are also at Amazon. 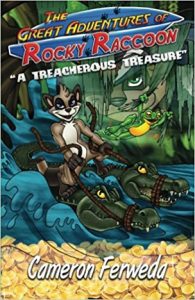