Werewolf To The Rescue

Somehow this missed us the first time around, but now it’s out in a new in a new full-color hardcover collection from Image Comics: All 25 issues of The Astounding Wolf-Man. “When Gary Hampton is mauled and left for dead, his life takes a drastic turn! When the moon is full, he transforms into a beast of the night—a werewolf! But this curse will not be used for evil. Witness the birth of the world’s most unlikely new superhero—The Astounding Wolf-Man!” It’s written by none other than Robert Kirkman (The Walking Dead) with art by Jason Howard. Look for it at the end of this month. 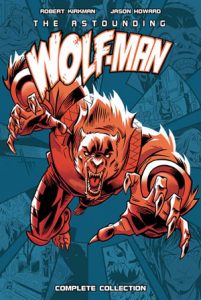