And You Think YOU’RE A Fanboy…

Something else that slipped below the radar, even though it appeared at the Sundance Film Festival. Brigsby Bear is a new surreal live-action comedy produced by the Lonely Island folks from Saturday Night Live. According to Wikipedia, the story goes like this: “James Pope was kidnapped from a hospital as a baby and since childhood all the way to adulthood has known nothing about the world except Brigsby Bear, a children’s show character fabricated by his kidnapper parents. One day, James is rescued and brought out into the real world where he learns that Brigsby Bear is not a real children’s show. Confused and baffled by these turn of events, James sets out to make a Brigsby Bear movie to show the world what he has learned.” Starring Kyle Mooney (Saturday Night Live) as James, the film is directed by Dave McCary. Other notable names in the cast include Greg Kinnear and Mark Hamill. Sony Pictures picked up Brigsby Bear and will release it to theaters at the end of July. 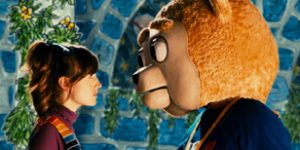