Catch Our Next Thrilling Episode

American Mythology continue their quest to bring back classic cartoons in comic book form. Next up? The heroes of Frostbite Falls, Rocky the flying squirrel and Bullwinkle the not-flying moose. According to Bleeding Cool, “Rocky & Bullwinkle comic books have been published by Gold Key, Charlton, Marvel and IDW over the decades, the last being in 2013. Well, the latest comic publisher to take on the pair is American Mythology Productions, with a new series by Todd Livingston and Jacob Greenwalt.” Meanwhile, the publisher says it like this: “Hey Rocky, watch me pull a rabbit out of my hat! That staple of Saturday morning cartoon shenanigans, The Rocky & Bullwinkle Show, is back in all its satirical slapsticky joy! The entire misfit cast of Jay Ward’s wonderful series are here — Rocket J. Squirrel, Bullwinkle the Moose, Mr. Peabody & Sherman, Dudley Do-Right, and everyone’s favorite Russian hooligans, Boris and Natasha! American Mythology celebrates the return of a one-of-a kind comic book with adventures and high jinx that are fresh and funny while remaining true to the look and format of the classics!” Look for the first issue later in June. 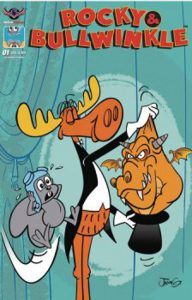