Before The War — The Escape!

More gearing up for the new War for the Planet of the Apes feature film this summer. Now Boom! Studios have brought back a classic from the 1970’s with the Planet of the Apes Archive Volume 1, coming this August in hardcover. According to Previews, “Experience the legendary 1970s Marvel Comics’ Terror on the Planet of the Apes, collected for the first time ever and remastered in this prestigious hardcover. This classic series follows two friends – man and ape – on the run from the law. From Doug Moench (Batman), Mike Ploog (Ghost Rider), Tom Sutton (Doctor Strange), Herb Trimpe (Incredible Hulk), and more!” 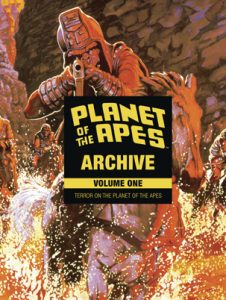