He Ain’t Canine, He’s My Brother

And here’s another, perhaps much stranger work coming soon from First Second: Making Scents, a new full-color graphic novel written by Arthur Yorinks. Here’s what they say over at Kirkus Reviews: “In this thoughtful graphic novel, a human boy who believes himself to be part dog seeks acceptance for who he is. Mickey’s brothers and sisters all have four legs. His ardently dog-loving parents are professional bloodhound breeders who never planned on having a child. His parents encourage Mickey to develop his own sense of smell, which becomes just as acute as his hound siblings’. However, when his parents suddenly die, he goes to stay with his estranged aunt and uncle, a much older couple who hate dogs and demand that Mickey start acting like a boy. Now in the throes of grief, Mickey must also struggle with having to conform to someone else’s idea of whom he should be.” Illustrated by Braden Lamb and Shelli Paroline, Making Scents is coming in hardcover at the end of June. 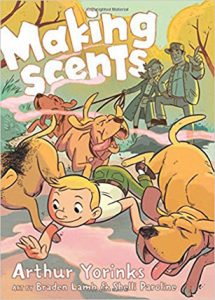