Recently the artist A.M. Scharf (who creates under the name Acidpluvia) put up a link to an interesting Kickstarter campaign. Acidpluvia has been asked to be the official illustrator for Rabbit Island, a card-and-tile game created by Leslie and Samantha Et Alia of Infinite Heart Games. “Play as one of the four Tribal Leaders and explore a new island every game in this light 4x game for 2-4 players. Build up your civilization using your Carrot Tokens and special Action Cards – can you conquer your opponents in 20 rounds?” The campaign page has much more in the way of artwork and descriptions of the game play. The Kickstarter campaign runs through mid-July. 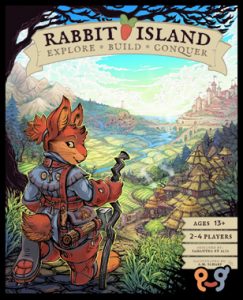