We haven’t heard of NoBrow Press before, but here now they’ve brought us a new full-color graphic novel called Garbage Night. It’s written and illustrated by Jen Lee. Here’s what they say: “In a barren and ransacked backyard, a dog named Simon lives with his two best friends: a raccoon and a deer. The unlikely gang spends their days looting the desolate supermarket and waiting for the return of the hallowed ‘garbage night’ – but week after week, the bins remain empty. While scavenging one day, the trio meet Barnaby – another abandoned dog who tells them about the ‘other town’ where humans are still rumored to live. Spurred on by hunger and the promise of food, the trio joins up with Barnaby and set off into the unknown…” It’s available now in hardcover. The Comics Journal has an extensive preview too. 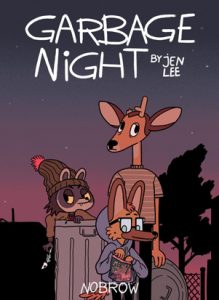