The Cat and the Lasagna

For those with an interest in one of the longest-running (and best-known) funny animal comic strips, Hermes Press have a new Garfield compilation that sure to cat(ch) your eye. According to the publisher: “Hermes Press is proud to announce their second major collaboration with Paws, Incorporated producing another unique title featuring everyone’s favorite orange cat, Garfield! Hermes and Paws have come together to treat the world to a compendium of the greatest examples of original artwork from classic Garfield daily and Sunday comic strips in their original size, including rare unpublished material, that has never been seen before… This historic archival reprint will feature hundreds of pieces of original production art from the comic strip, with an introductory essay from Jim Davis himself! If you love Garfield and want to experience the strips as they were originally drawn, this is the book for you! From the very beginning in 1979 to the last non-digital strip in 2011, this purrfect book shows you Garfield like you’ve never seen him before!” Jim Davis’ Garfield: The Original Daily and Sunday Art Archive is coming in hardcover later this summer. 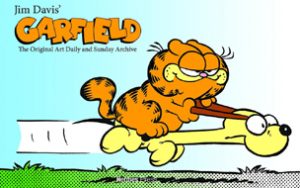