War on the Horizon

Critics (and many other movie geeks) are already getting excited for the upcoming feature War For The Planet Of The Apes, coming to theaters July 14th. Before that though, BOOM! Studios have a new full-color prequel comic set to premier. According to Slashfilm.com, “War for the Planet of the Apes takes place two years after the events of Dawn of the Planet of the Apes. And to help bridge that time jump, 20th Century Fox has teamed up with BOOM! Studios to present a new comic book miniseries… The War for the Planet of the Apes comic book miniseries will be written by David F. Walker (Power Man and Iron Fist and Shaft) and illustrated by Jonas Scharf (Warlords of Appalachia).” It’s perhaps a bit confusing that the prequel comic book has the same title as the upcoming film that follows it, so remember to keep your continuity straight! 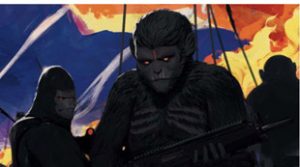