M is for Mouse Guard

More from BOOM! Studios. Mouse Guard creator David Petersen has a new project: The Mouse Guard Alphabet Book. It’s coming soon in hardcover, written by Mr. Petersen and illustrated by Serena Malyon. Comic Book Resources has a preview. “Learn the ABCs in the world of David Petersen’s Mouse Guard where brave mice protect one another from predators large and small, explore the expansive nature around them, and thrive in harsh conditions. Hand-painted by Serena Malyon (Magic in the City, Button Hill), this is a look into a beautiful world with rich culture and stalwart friendships, worth exploring one letter at a time.” Look for it at book and comic stores in September. 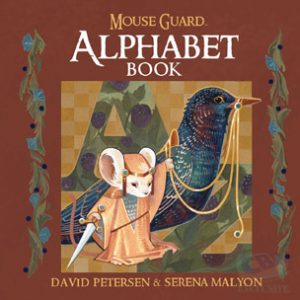