A well-known space-hero-bunny returns thanks to Continuity Comics. According to Previews, “For the first time ever, Michael Golden’s original pages of the Bucky O’Hare graphic novel in its original form is printed in black and white and ready to color! Unaltered and pure Golden! Green Rabbits, Orange Ducks, White Cats and Willy’s Reddish-Brown hair! Oh, and Green Toads! Also included, for the first time in decades, is an all-new story featuring all-new characters from the second year toyline. Characters like Pitstoppete and the Betelguesian Banana Runners and Toad Bombers! Learn how Pitstoppete became one the greatest and fiercest mechanic in the entire Aniverse…and color the entire adventure!” Look for the Bucky O’Hare Graphic Novel Coloring Book at the end of this month. 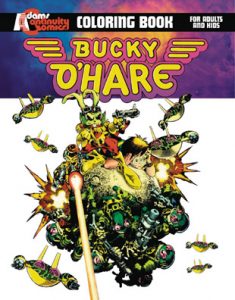