Among the big announcements to come out of this year’s D23 Expo (Disney’s bi-annual convention for their biggest and geekiest fans — hey, your ed-otter is one!) is news of an as-yet-untitled new CGI film from Pixar… a “suburban fantasy”. According to a preview at Entertainment Weekly, “During the fan convention’s animation panel on Friday, John Lasseter introduced director Dan Scanlon to unveil details about a new original film on Pixar’s upcoming slate, filling in one of the cryptic untitled slots on the studio’s release schedule. Lasseter described the film as ‘an adventure set in a suburban fantasy world,’ and Scanlon, who helmed Monsters University, debuted concept art showing a large winged creature flying over a small town at sunset. Set in a human-less world of elves, trolls, sprites, and ‘pretty much anything that would be on the side of a van in the ‘70s,’ the movie follows two teenage brothers whose father died when they were young; now, they’re on a quest through this mundane, modern fantasy world to somehow find a way to spend one last magical day with their father.” Oh and by the way, there are unicorns everywhere. and a dragon or two thrown into the mix as well. No word on a release date yet (or a title!), but speculation is leaning toward the summer of 2020 or 2021. 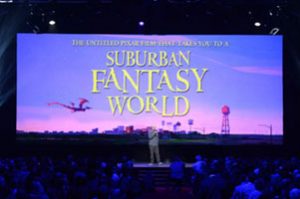