Now there’s a new full-color graphic novel for young readers with the interesting title of Dog Night at the Story Zoo. It’s written by Dan Bar-El and illustrated by Vicki Nerino. Here’s how the publisher says it: “It’s Open Mic Night at the Story Zoo and the dogs are up to tell their tales in this hilarious graphic novel for young readers. At the Story Zoo, you get to tell any story you want in front of the live audience, as long as it’s about you. And tonight is dog night. So sit back, relax, and let these dogs tell their tales. We’ve got some hilarious but quite touching stories from dogs of all kinds, including a bulldog who doesn’t wanted to be judged by his looks; a bloodhound who loses her power of scent and turns to a dog called Surelick Holmes for help; an energetic poodle who saves the day with her yapping; and a stray who takes fetching to a whole new level.” Got all that? It’s available now in hardcover. 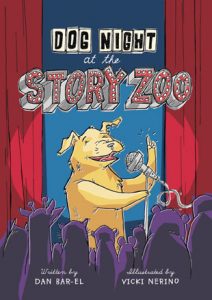