Look! Up in the Sky!

According to an article at Animation Magazine, the Chinese tech company Tencent has agreed to invest heavily in the development of a new CGI series, Super BOOMi, created by Up Studios (also from China). This furry little super hero has already enjoyed widespread exposure in China, and now his creators are looking to expand his reach to international markets. Up Studios are also working on at least two other animated adaptations: Piggy and Tomo Explores The World. 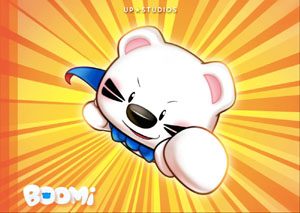