Put A Pug In Your Life

And another studio making the rounds again. This time from France. We learned about TeamTO in 2014 thanks to their feature film Yellowbird. Now they’re back with a television and on-line project that’s getting a lot of press, called Take It Easy Mike. “Described by TeamTO as ‘Tom & Jerry meets silly pet videos’, it turns on Mike, a refined pug with boundless energy and sophisticated tastes who’s dead-set on seducing the neighbor’s lovely dog Cindy. But his best laid plans go awry – thanks to the inopportune appearances of a bunch of trouble-makers: Freddy and Mercury, raccoons; Fluffy the cutest kitten; and a turtle trio – all causing unforeseen twists and turns.” But that’s not the reason this no-dialogue project is turning heads. “…One of the show’s stars – and what really sets it apart and has certainly got TV networks and TeamTO excited – is its photo-realism, fruit of TeamTO’s decade-long push to improve the quality, costs and speed of its physical animation.” Could not find any footage on line though, so it seems as if we’ll have to wait ’till 2018 to see what it’s like. 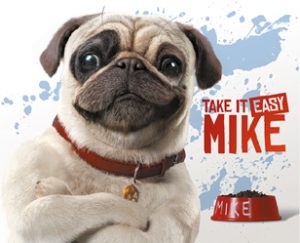