Here’s another one that somehow flew over the moon yet under our radar for some time. Rocket Monkeys was a 2D animated series from Canada (they get SO many interesting shows up there!) created by Dan Abdo and Jason Patterson. According to Wikipedia, “Brothers Gus and Wally are monkey astronauts. They’re not the brightest or coolest astronauts, but since they’re the only ones around, they are called upon to go into space and carry out different kinds of important missions—including battling rogue black holes and vengeful aliens. Other members of the brothers’ crew include bossy astrophysicist Dr. Chimpsky, who gives the monkeys their assignments; YAY-OK, a devoted robot that is slightly outdated and is the brothers’ only hope to help keep them on course; and Inky, a space octopus and artist who communicates through his ink drawings.” Looks as if the show ended it’s run in the US back in 2016. Fortunately, lots of episodes are still up and about on YouTube. 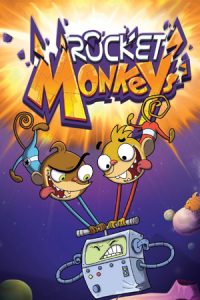