From out of nowhere… actually, from out of Spain. The Think Lab is an animation production house in Madrid, and they recently completed their first CGI feature film, Deep, directed by Julio Soto Gurpide. “In 2100, when humanity has abandoned the earth, a colony of extravagant creatures still thrives in the deepest abyss of the ocean. Deep, an adventurous ‘dumbo’ octopus and the last one of his kind lives there with his two unconditional friends: Evo, a nerdy and clumsy angler fish, and Alice, a neurotic deep-sea shrimp. When an accident destroys their home, the guardian of the abyss, The Kraken, will send Deep and his friends on a perilous journey to find a new home. In their mission, they will be joined by Maura – a voracious moray eel – and together they will travel to amazing places like the submerged city of New York, the Titanic, or the Arctic, facing formidable enemies and hilarious situations.” No talk of a release here, but the IMDB page lists all English-speaking actors, and the trailer is in English too. 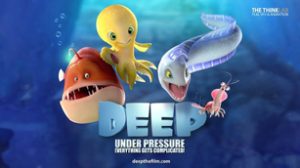