Here’s the Plan is a new 2D animated short film from Chile, written and directed by Fernanda Frick. “A married cat-dog couple of cupcake bakers dream of opening their own bakery. One day their oven breaks and they have to postpone their dream in order to earn money and replace it. Somewhere down the line, they drift apart from their dream and from themselves.” It had its world premier at the Nashville International Film Festival last April, and it’s been making the rounds at animation festivals since then. The official web site has a lot more info. 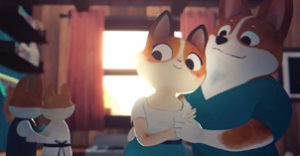