Fruit of the Looney Tunes

Um, we’ll let the folks at Kechal Comics explain it: “Placed in men’s tightie whitie underwear on a whim by the scientist who captures him, Baxter the monkey does the only logical thing possible – he instantly develops consciousness and the ability to speak. Because… SCIENCE!!! Excited by his discovery, the scientist decides to see if other animals react as well as Baxter. Gaining intelligence, rational thought and an innate understanding of justice and fairnesss. Let’s just say further experiments do not go as well. Join Baxter as he navigates a world he’s just starting to understand, a world full of fearful humans, zany animals, and one seriously deranged bunny rabbit.” See? We told you they’d say it better! Underwars #1 was written by Kevin Joseph and illustrated in black & white by C.M. Brennan, based on a series of paintings he did. 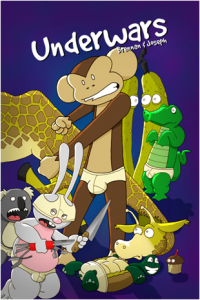