One Person’s Meat is Another Person’s… Neighbor?

Voracious is a recent full-color comic book series written by Markisan Naso and illustrated by Jason Muhr and Andrei Tabacaru. The first story arc (Diners, Dinosaurs, & Dives) was the simple (?) story of a young chef who inherits a time travel suit — and uses it to collect dinosaurs he can slaughter and butcher to make new meat for his ailing restaurant. (Not your vegan ed-otter’s cup of tea, but what the hey…) In the second story arc however (Voracious: Feeding Time), things take on a decidedly more anthropomorphic turn: “Hunting dinosaurs and secretly serving them at his restaurant, Fork & Fossil, has helped Chef Nate Willner become a big success. But just when he’s starting to make something of his life, he discovers that his hunting trips with Captain Jim are actually taking place in an alternate reality – an Earth where dinosaurs evolve into Saurians, a technologically advanced race that rules the far future! Some of these Saurians have mysteriously started vanishing from Cretaceous City and the local authorities are hell-bent on finding who’s responsible. Nate’s world is about to collide with something much, much bigger than any dinosaur he’s ever roasted.” Nothing worse than discovering you’re accidentally a serial killer… Feeding Time is available now in a collected edition from Action Lab. 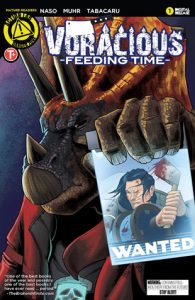