Update on a Goose

We mentioned before about an upcoming animated film called Duck Duck Goose, one of several films being financed the Chinese firm Original Force with the intention of releasing in North America. Well now, according to an article at Cartoon Brew, Duck Duck Goose has a release date — April 20th, 2018 — and a teaser trailer up on YouTube. “Chris Jenkins, a veteran Disney effects animator who more recently shifted to the producing side (Dreamworks’ Home, Sony’s Surf’s Up), makes his feature directorial debut on Duck Duck Goose. Jenkins co-wrote the film with Rob Muir… The film follows the adventures of a ‘high-flying bachelor goose’ named Peng (voiced by Jim Gaffigan) who finds himself in charge of two ducklings (voiced by Zendaya and Lance Lim) that he must take along on a long journey south. Other voices are provided by Greg Proops, Natasha Leggero, Reggie Watts, Diedrich Bader, Jennifer Grey, Rick Overton, Craig Ferguson, Stephen Fry, and Carl Reiner.” Distribution is being handled by Open Road Films, the same outfit that released The Nut Job and its recent sequel here in the States. 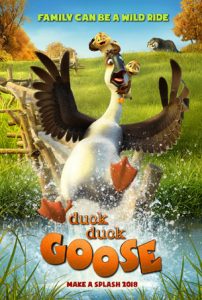