At Comic Con we came across Marcus L. Lukusa, a martial arts champion and (nowadays) fantasy author from the Democratic Republic of Congo. His first work in his new Kazungul series has the quite-a-mouthful title of Kazungul: Blood Ties – Awakening of the Ancestral Curse. “My name is Raymond. Until recently I was just a normal boy. Well, besides the fact that I grew up wearing a copper bracelet and a malachite collar. When I moved to Johannesburg though, everything changed. I found out that I had a dark side and that I had enemies. Enemies that wanted to destroy me and others like me. I need to find a way to stop them. I need to get control of my dark side.” In so doing, Raymond takes up boxing — which leads to his transformation into Kazungul, a giant winged wolf-like creature. “In a universe filled with war and mystical creatures, Raymond embarks on a journey to discover his true identity and to tame his dark side. During his journey he meets a mermaid, gets tangled up in a love triangle, is taken prisoner, finds his ancestors, and is dragged into the worst war the universe has ever seen: The war of Gog and Magog.” Find out more at Amazon. 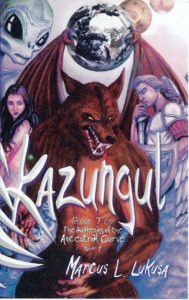