You may recall we previously mentioned Jed Henry and Dave Bull and their proposed video game Edo Superstar, with an art style based on the ancient art of Japanese wood-block prints. Well now their web site tells us they got the game completed, and they’re also making and selling their own line of wood-block prints (copied as giclees). A close look at many of the prints will reveal some subtle (or not-so-subtle) comic book, animation, and video game subjects depicted in a new and stylized manner. 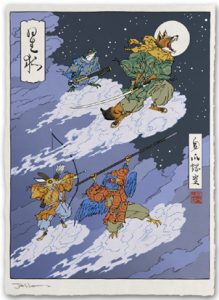