And speaking of crossovers (when will they stop?), Dynamite Entertainment and Boom! Studios’ Kaboom! imprint have joined forces to join up a classic well-known sassy cat with a currently well-known sassy cat. Yes, it’s the Grumpy Cat / Garfield 3-issue miniseries. There’s a preview over at Previews: “It’s the inevitable meeting of the sourpusses! Garfield, the reigning cynical cat of newspapers and TV crosses paths with Grumpy Cat, the internet sensation whose scowl endeared herself to the world. Who’s the most sarcastic? Well, he likes lasagna and not much else… and she doesn’t even like lasagna. Can these two inhabit the same comic book mini-series, let alone the same planet? You’ll find out in a trio of issues written by Mark Evanier and illustrated by Steve Uy. We’d say it’s the cat’s meow but neither of these cats meow.” The second issue of this full-color series is already out in stores. 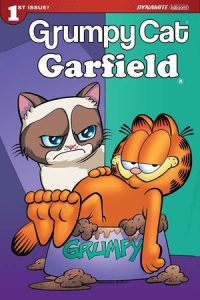