Humanoids (the publisher!) have imported a new hardcover graphic novel series for young readers called Gregory and the Gargoyles. We got this from Previews: “Young Gregory is unhappy and restless when his family moves to a new neighborhood, opposite a cathedral. Bullied by other kids, and left to his own devices at home, he discovers a strange medallion with a drawing of the church on it, and sets out explore the great building and the giant stone statues that rest on top. Before he knows it, Gregory is hurled back to 17th-century France, smack-dab in the middle of gargoyles, dragons, and sorcerers locked in an ongoing battle against dark forces. A hilarious, magical tale from master storyteller Denis-Pierre Filippi (Muse, Marshals) and artists J. Etienne (Brussli: Way of the Dragon Boy) and Silvio Camboni.” It’s in stores now. 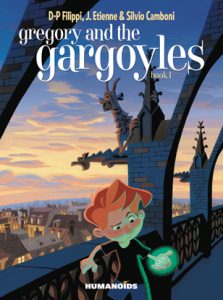