Okay, now here’s something very much different: Dead of Winter, a new full-color miniseries from Oni Press. According to Geek.com, it’s like this: “In the pantheon of heroes, none are more lovable and loyal than everyone’s beloved good ol’ dog, Sparky. Surviving in the wintery apocalypse of the undead, this former TV star turned zombie killing machine just wants to make friends and be a good boy. As his fellow survivors scavenge for supplies in the frigid wasteland, will Sparky be able to protect his companions from threats both undead and not yet undead? Oni Press brings us a new kind of zombie apocalypse with Dead of Winter #1, a comic adapted from the table top game, Dead of Winter: A Crossroads Game, designed by Isaac Vega and Jon Gilmour for Plaid Hat Games.” You heard it here. The comic is written by Kyle Starks and illustrated by Gabriel “Gabo” Bautista. Look for it now — before they get you! 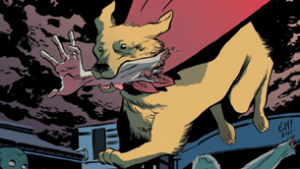