The strange meeting of Hanna-Barbera pushed sideways through DC Comics continues with the recent release of Dastardly & Muttley #1. According to them, it’s like this: “It’s a red-letter day for the good folk of Unliklistan as they start to power up their first atomic reactor. But after pushing the wrong button, the ultra-rare radioactive element, unstabilium, has been released into the atmosphere! Now it’s up to pilot Lt. Col. Richard ‘Dick’ Atcherly and his navigator Captain Dudley ‘Mutt’ Muller to save the day. Will they safely complete their mission? Or are things about to get a little…wacky?” Written by Garth Ennis and illustrated by Mauricet, it’s available now. 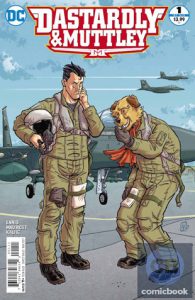