Beware of the Crow King

Well, somehow this passed under our noses… fortunately, they brought it back! We’ve talked before about the comic Hero Cats of Stellar City. Turns out that issues #16 to #18 took things in a whole new direction. Now Action Labs Entertainment have collected those issues together in a single trade paperback, Hero Cats of Skyworld. Bandit (a Hero Cat from Earth) and his robot friend (of course) are transported to Skyworld, a magical realm ruled with a scaly fist by Corvus the Crow King. There, Bandit meets a whole new group of Hero Cats and enlists their aid in his quest. Written by Kyle Puttkammer and illustrated by Omaka Schultz, this new graphic novel is available now. There’s an extensive review over at Comicosity, including several preview pages. 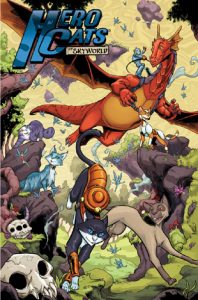