Behind the World Where Animals Rule

Of course we’ve already talked about Animosity, the dystopia/black comedy comic book series from writer Marguerite Bennett. Well now Aftershock Comics are back with another one-shot tie-in called World of Animosity. “A journey through an apocalypse like none ever imagined—this singular one-shot brings readers and fans alike an exclusive look at the characters, creatures, maps, mysteries, enemies, histories, and the road-so-far in a world where the Animals have risen up to take revenge. This standalone collection includes a variant cover gallery, character designs, never-before-seen artwork, and summaries that will not only bring new readers up to speed, but allow existing readers to dive deep with new information into stories they already love!” It’s on the shelves now, and the Hollywood Reporter has a interview with Ms. Bennett.  Hmmm, could that mean a movie adaptation is in the works…? 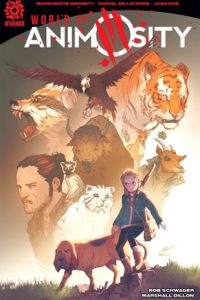