Meet The Dinosaur Next Door

Bolivar is a new hardcover graphic novel written and illustrated by Sean Rubin and published by Archaia. Here’s what Sean says on his blog: “When a young girl named Sybil moves to New York, she discovers that her next-door neighbor is a little unusual, even by local standards. Bolivar is the world’s last living dinosaur, but everyone in the city is too busy to notice him.When Sybil and Bolivar are pulled into an adventure that spans from City Hall to New York’s Natural History Museum, Bolivar must make a choice: He can continue to live unnoticed, or he can let the city see who he really is.” Turns out that Bolivar is already under development at Warner Brothers as a feature film, possibly to be directed by Kealan O’Rourke. Stay tuned for more about that. 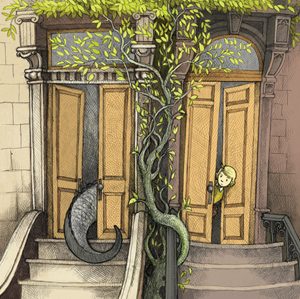