According to Previews, a classic British black & white wildlife comic called Marney the Fox is available again, now in a hardcover collection. We got this from Blimey, the Blog of British Comics: “Just to cover the basics; Marney the Fox appeared in Buster weekly from the issue dated 22nd June 1974 to 11th September 1976. This fictional story of a wandering fox cub was written by Scott Goodall and illustrated by John Stokes. The artwork was absolutely superb and many consider it to be amongst Stokes’ best work. (The artist himself regards it as some of his best too.) One thing that made Marney the Fox exceptional is that, unlike most other Buster adventure strips, it played up the emotional content.” The new collection is available now from Rebellion/2000AD. 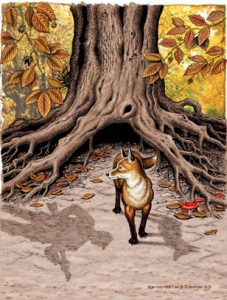