How to Battle With Your Dragon

[Back in town again, your ed-otter is happy to get caught up with new furry stuff!] Looking ahead to the delayed-but-still-coming film How to Train Your Dragon 3, Dreamworks Animation have a new full-color graphic novel coming early next year from Dark Horse. “This second standalone graphic novel based on the film series is a new adventure that takes place shortly after the events in How to Train Your Dragon 2, during the period in which Hiccup is desperately trying to fill his father’s role as the chief of Berk. Created with the help of the film’s writer, director, and producer, Dean DeBlois; it bridges the gap between the second and third films. Hiccup, Toothless, and the rest of the dragon riders encounter two deadly yet mysteriously linked threats: One is an island consumed by Dragonvine, an uncontrollable force of nature that’s poisonous to humans and deadly to dragons. The other is an all-new, all-terrifying dragon species – the web-spitting Silkspanners!” As they noted in the press release, How to Train Your Dragon: Dragonvine is written by Dean Deblois and Richard Hamilton, with illustrations by Francisco de la Fuente and Doug Wheatley. 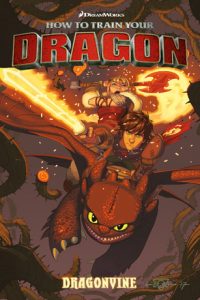