Fun with Cats and Dogs

Over at DC Comics, the “let’s fool around with Hanna-Barbera” fun continues… with the premier of The Ruff & Reddy Show comic. “In the Golden Age of television, Ruff and Reddy were on top of the entertainment world…until the world turned, and they were forgotten. Now, Ruff is a washed-up television actor. Reddy is a clerk in an upscale grocery store. Can a hungry young agent convince the two one-time partners to make a comeback—and convince the world that it wants to see the famously infamous dog-and-cat comedy team back in the spotlight?” Written by none other than the famous Howard Chaykin, with art by Mac Rey. Look for it by the end of October. 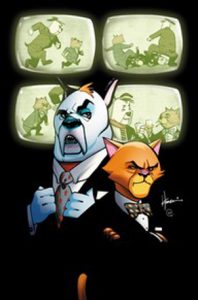