Quest of the Vegetables

Cucumber Quest is a popular on-line fantasy adventure comic for young readers, written and illustrated by Gigi D.G. Now it’s been assembled by First Second into a new full-color graphic novel, Cucumber Quest: The Doughnut Kingdom. It goes like this: “What happens when an evil queen gets her hands on an ancient force of destruction? World domination, obviously. The seven kingdoms of Dreamside need a legendary hero. Instead, they’ll have to settle for Cucumber, a nerdy magician who just wants to go to school. As destiny would have it, he and his way more heroic sister, Almond, must now seek the Dream Sword, the only weapon powerful enough to defeat Queen Cordelia’s Nightmare Knight. Can these bunny siblings really save the world in its darkest hour? Sure, why not?” The first volume is available now, in hardcover or trade paperback. 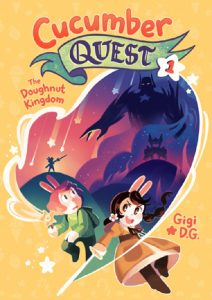