An interesting project we stumbled across at the LA. Comic Con, with the deceptively simple title of Bun. Brought to us by the writing and illustration team of Brian Silveira and Lisa Nguyen, Bun is a graphic novel fantasy/horror series the couple created and published themselves. Their web page describes it like this: “A boy. A girl. An unspeakable evil. A rabbit.” An interview in a local newspaper gave us a bit more description: Bun is “…an intricate tale that follows a young boy and his pet rabbit, the titular Bun. The book picks up after the boy, Milo, loses his mother to cancer. In the wake of her death, his father retreats into alcoholism and depression, essentially making the boy an orphan, alone and struggling with his grief. Milo suddenly disappears, transported to another world where his rabbit Bun serves as the only bridge back home.” The first and second installments of this black & white series are available now. 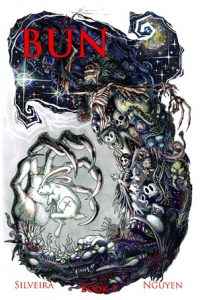