The Ape You Fear The Most

2018 marks the 50th anniversary of the release of the original Planet of the Apes movie. (“You blew it up!”) You can bet there will be plenty of media celebrating that milestone. Possibly first out of the gate, BOOM! Studios has a new full-color series: “BOOM! Studios and Twentieth Century Consumer Products are excited to announce Planet of the Apes: Ursus, a comic book series launching in January 2018 about the classic franchise’s most notorious villain. Written by David F. Walker (Power Man & Iron Fist, War for the Planet of the Apes) and illustrated by Christopher Mooneyham (Five Ghosts) — both longtime fans of the franchise — the series will follow the rise through the ranks of the ape who has hated (and feared) mankind the most, including what first brought him to the Forbidden Zone. This is the first project from BOOM! Studios in 2018 as part of their yearlong celebration of the franchise’s 50th anniversary.” Previews has an extensive interview with Mr. Walker about bringing the series to life. 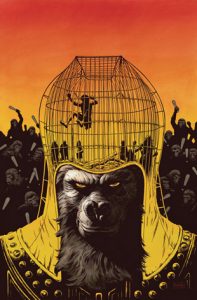