Step into the World of Crow

Recently, we learned about a new 3D virtual reality film in the works called Rainbow Crow from Baobab Studios. The idea is to make a short film where the viewer can step into a different world and interact with animal characters as they tell you a story. In this case, it’s a Native American legend about how the crow saved his fellow animals from a harsh winter frost — and in so doing, gained his famously black feathers. Directed by Eric Darnell from Dreamworks (Antz, Madagascar), Rainbow Crow stars the voices of singer John Legend, Diego Luna, Constance Wu, and Randy Edmonds. A short preview film (about 4 minutes of the final 40) made the rounds recently at Tribeca and other film festivals. Road To VR has an article about the production of the film. 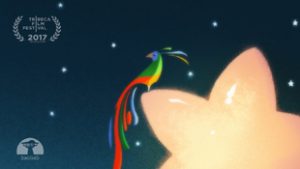