If You Give A Mouse A TV Show

Looks like Amazon has brought us a classic children’s illustrated book series as a new animated TV series for their Amazon Prime service. If You Give A Mouse A Cookie (famously written by Laura Numeroff and illustrated by Felicia Bond in 1985) was adapted for animation by Mercury Filmworks in Canada. Show-Runner Joe Scarborough has quite the animation resume’, having worked on shows like Arthur, Doug, Curious George, Pocoyo, and Martha Speaks. This new series follows a young boy named Oliver and his best friend, an adventurous mouse. Their friends are various other kids whose companion animals include a cat, a pig, and even a moose. Check out the preview video over at YouTube. 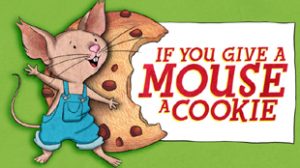