Another one we learned about from Animation magazine: Italy’s Rainbow Studio (home of Winx Club) has teamed up with Canada’s Bardel Entertainment to bring us 44 Cats, a new animated TV series. (The title is based on a very very popular song in Italy.) Here’s what the creators say: “The series centers on a group of cats who act normally when thy are around people, but act just like humans when they are on their own. Just like children, the little cats see the world of adult humans as confusing and full of strange rules. Highlighting themes of friendship and altruism, 44 Cats is driven by the main characters’ love of helping others.” Currently the show is at MIPCON, searching for distribution in the wider world. 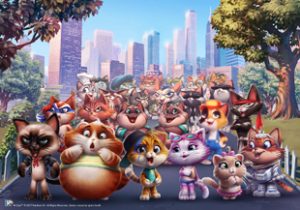